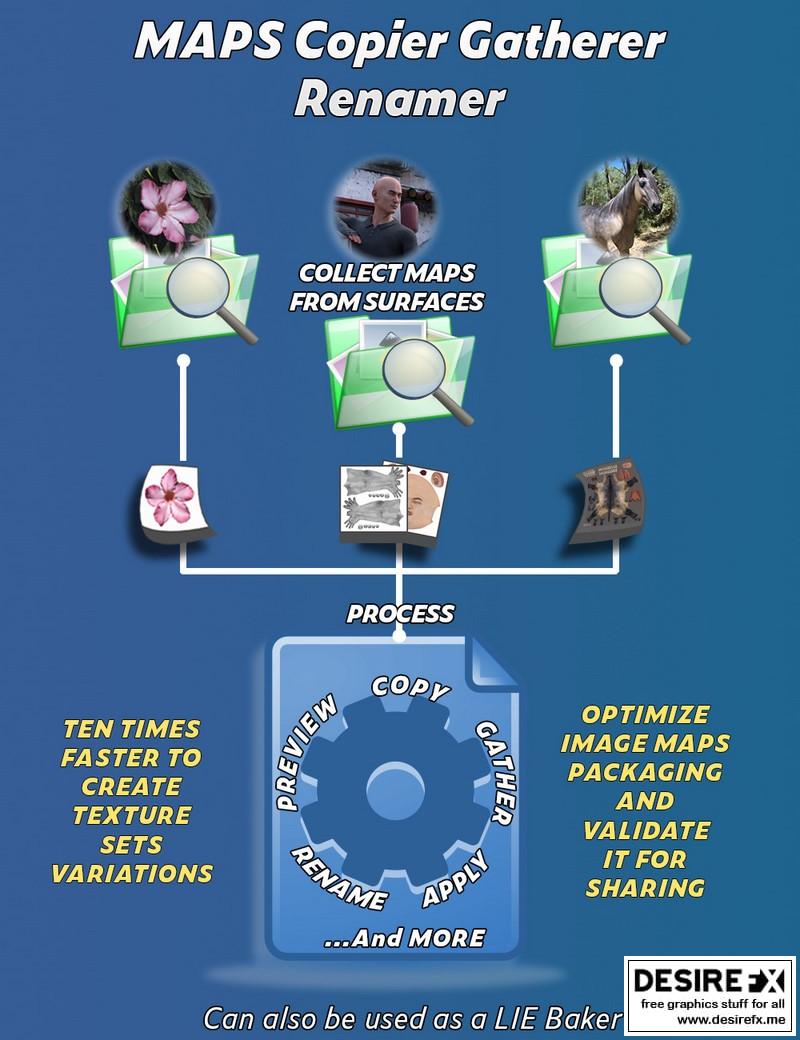 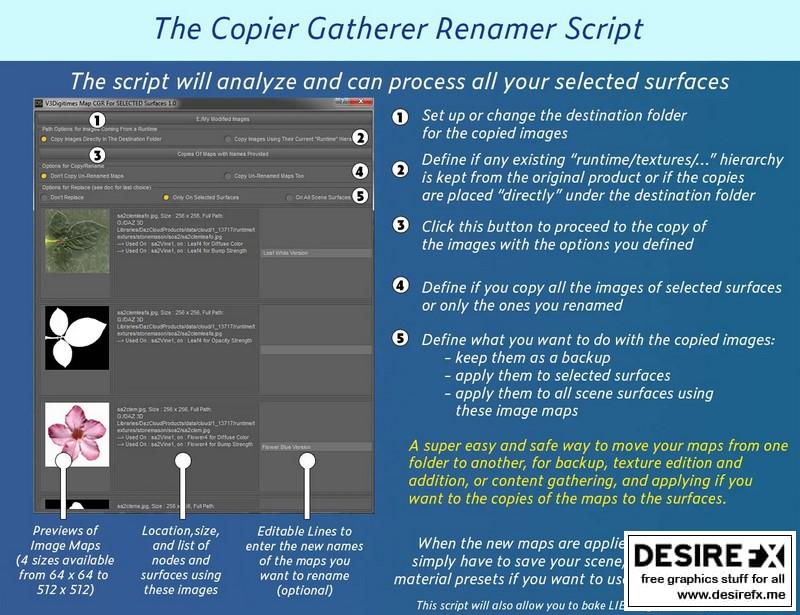 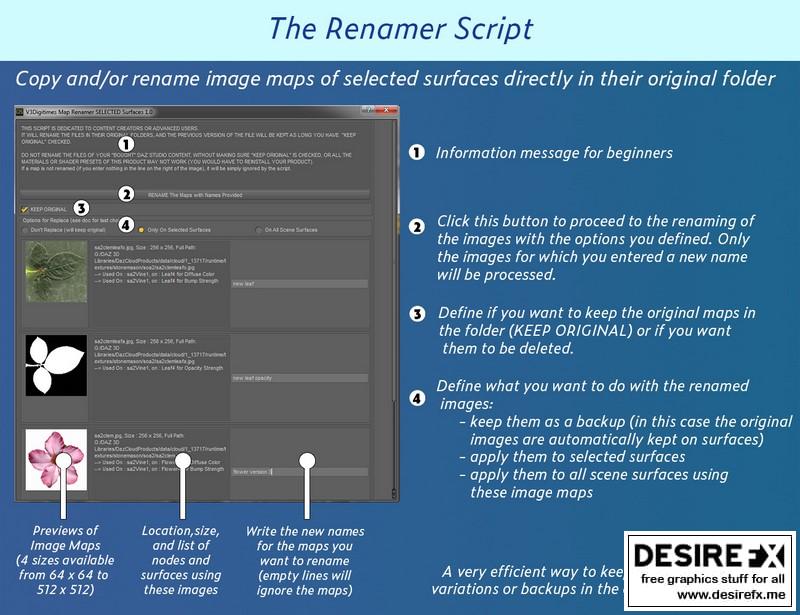 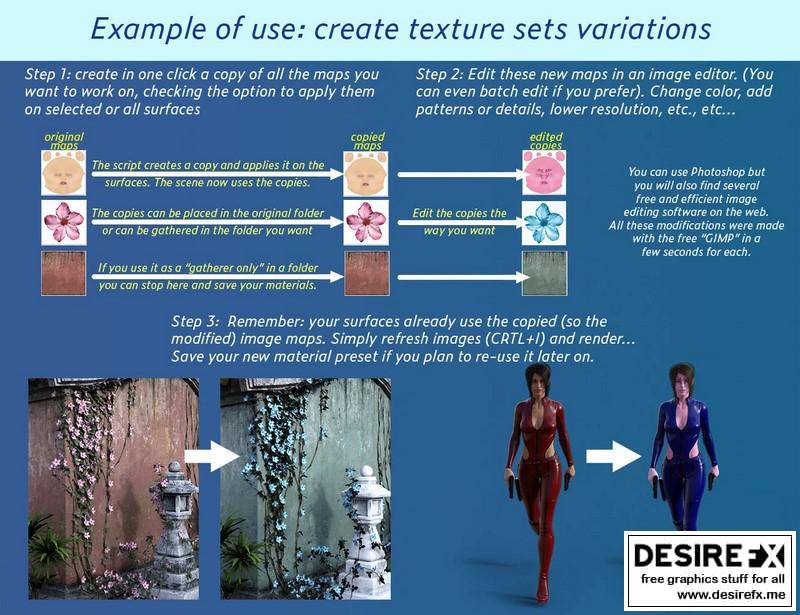 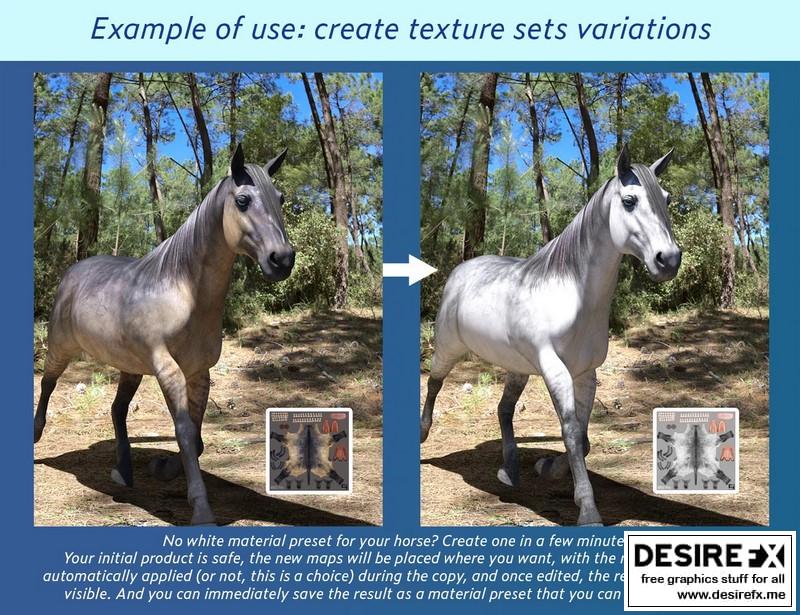 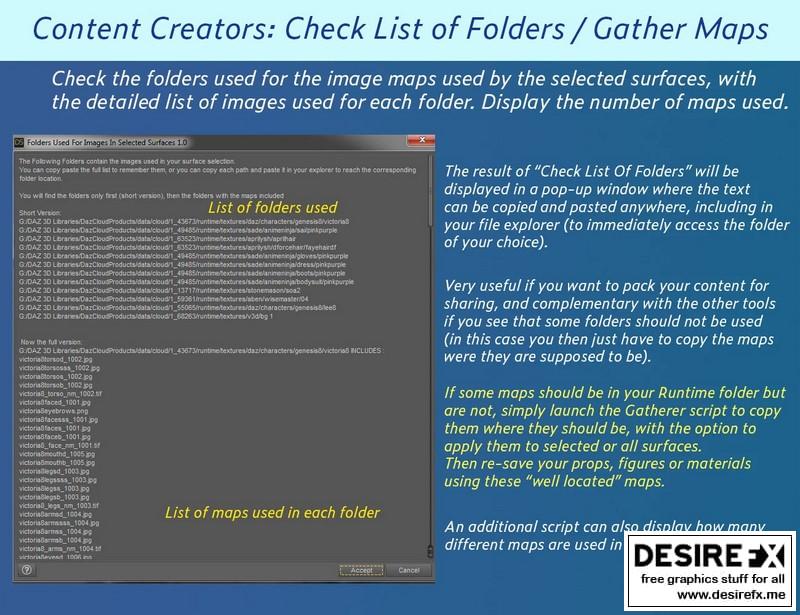 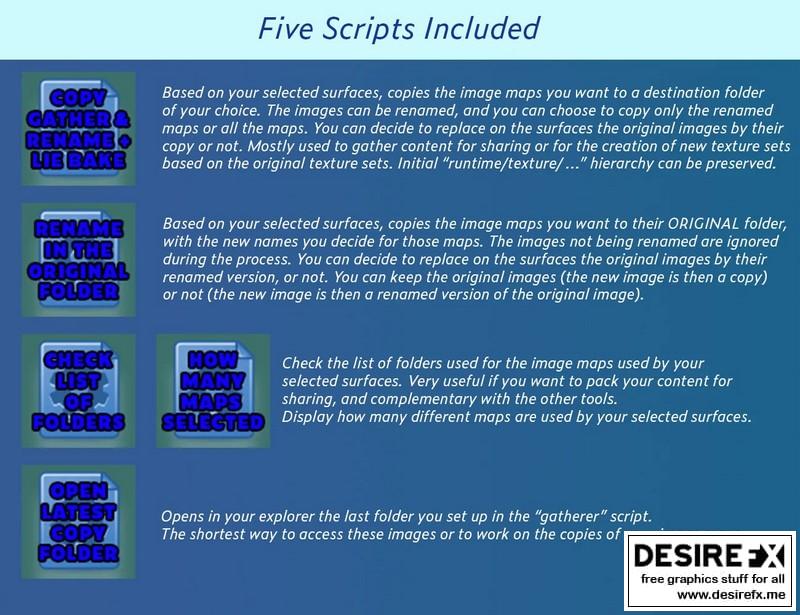 Maps Copier Gatherer Renamer is a set of specific tools conceived both for the Content Creators and the General Users.

With Maps Copier Gatherer Renamer you can, in the blink of an eye, create more efficiently than ever new variations of existing texture sets in order to give a new look to your scenes and products, or you gather your content very easily for packaging and sharing. And you can do all this while keeping the original image maps and original material presets safe if you want to.

Several scripts are included in this new set of tools.

For all users, content creators or not, the main scripts will create copies of the image maps used by your selection in a single click, in the folder of your choice. You can even very easily rename some of them at the same time, and decide if you apply them to the scene surfaces or not. Two main copy scripts are available, both acting on the image maps used by your selected surfaces:

The second script will rename the image maps in their original folders, with the possibility to keep or delete the original images. This is the perfect choice to add texture sets options and variations in the original product folder.

These choices give you the possibility to work directly in the scene with the copies of the original image maps being already applied to the surfaces you want. A major time-saver since you avoid all the fastidious tasks of browsing to the maps, eventually gathering them, copying them, renaming them, and re-applying them all manually, surface by surface, property by property. All this work is now done, for all the maps you want, in one single click.

Furthermore, if you wanted to modify some textures – for instance, to have blue flowers instead of pink flowers or a blue outfit instead of a red outfit – you can simply edit the copies of the images in any image editor to change their hue, lightness, saturation, to add new layers and new details, etc., etc., which will give to your materials the new look you want, keeping your original content safe. After edition, the result will be immediately visible in Daz Studio, allowing you to render immediately or, if you prefer, to save a new material preset, prop, or scene subset for later use.

Whenever you want you can save your scene, props, shaders, or materials using the copied (modified or not) maps. This is the same for the “gathered” maps if you planned to pack content for sharing, being sure that all the image maps will be in the folder.

In order to gain even more time, a script can directly open the last destination folder you set up for the copy.

At any time, you can check the list of folders used for the image maps of all your selected surfaces, making sure that all your maps are in the folders you are about to pack if you are a content creator or if you want to share a texture set. You can also know exactly the number of image maps used.

Whether you are a content creator wanting to make sure the image maps are well gathered were they should be, or you are also a simple user willing to create variations of the original texture sets much more efficiently than ever, these tools are for you.